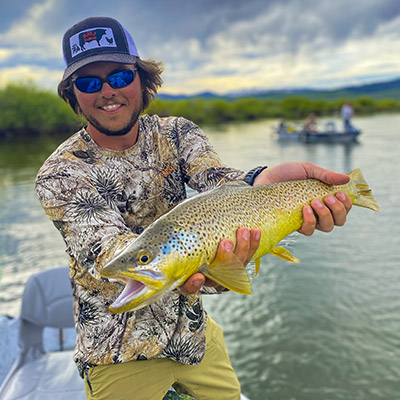 Born and raised in Georgia, Trey developed a passion for playing outdoors at an early age. Whether it was catching bluegill on a dock, chasing deer in the woods, or building a stick fort, it was never enough outdoor time. Trey’s first introduction to fly fishing came when he moved to the Appalachian Mountains of North Georgia to attend Young Harris College.

Trey quickly fell in love with the art of fly fishing, and it became routine to find him on a river rather than in class. Being able to explore all that the Southern Appalachians had to offer was such a gift. Wanting to continue to pursue fly fishing, Trey attended Vail Valley Anglers guide school in Edwards, CO in 2017.

With the skills learned here, Trey began guiding at one of the top trout streams in North Georgia through the remainder of college. After graduation Trey decided to try his hand at the business world, where he was a New Home Specialist for a custom home builder in the mountains of Asheville, NC and helped the company grow to become one of the city’s largest builders. When he could leave the office, he took every chance he could to chase trout up and down the Blue Ridge Parkway.

When Trey isn’t fishing, you can probably find him playing guitar or working on weird wine recipes!