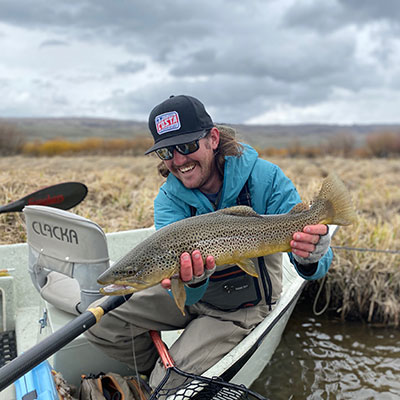 Growing up in the low country of Georgia, Liam has had a strong passion for fishing and the water from a very early age. When Liam was 15 he got his first boat and could be found chasing Redfish and Trout in the tidal creeks of the Savannah area. While in high school, Liam spent his summers obsessing over catching Tarpon during the summer migration on the west coast of Florida.

After high school Liam attended Young Harris College on a lacrosse scholarship. While at Young Harris, Liam got his first taste of catching native brook trout in the pristine mountain creeks and rivers. From that moment onward, Liam dedicated his time to honing his skills tying flies and chasing trout all over southern Appalachia. Liam then started a Trout Unlimited Costa 5Rivers fly fishing club on his campus and was president of the club for 2 years. During that time he taught people how to cast, tie flies and read rivers. He also coordinated fundraisers for Project Healing Waters and other fly fishing related charitable organizations. In his junior year Liam began his guiding career at one of North Georgia’s premier private trophy waters and has been guiding ever since since. Liam is a licensed U.S. Coast Guard Captain and his love of fly fishing has taken him to the Keys, Belize, the marshes of Louisiana, in addition to the infamous Boca Grande, and of course, the mountain west and Pinedale.

After graduating with a degree in Outdoor Leadership, Liam decided to continue to chase his dream of being a full time fly fishing guide. Liam moved to Pinedale shortly after graduation and fell in love with chasing the massive Brown trout in both the Green and the New Fork rivers while also stalking Cutthroat in the area’s crystal clear creeks.