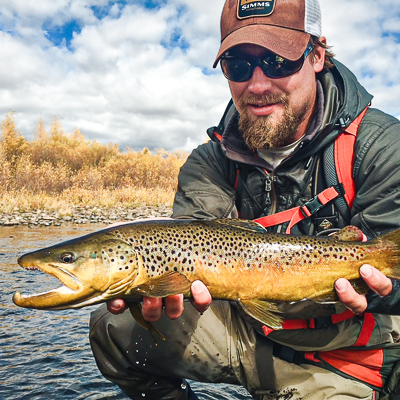 Andrew grew up in southeast Michigan and was introduced to fishing at a young age. He took advantage of the diverse fisheries of the state as much as possible. When he was a teenager, he was introduced to fly fishing and has been obsessed ever since. After graduating from Michigan State University, Andrew decided to follow his passion, moved to northern Michigan, and began working and guiding for Boyne Outfitters. The rivers, inland lakes, and great lakes in Michigan offer a wide range of fish to target with a fly. From bass and pike, to trout, and to great lakes salmon and steelhead, it was a great place to diversify himself as an angler.

After four years of exploring and guiding in his own backyard in northern Michigan, he decided to broaden his horizons and headed west. He spent a season guiding in northern Colorado near Steamboat Springs and then spent a season fishing around Truckee, California. For the last two summers, Andrew has been guiding for Newhalen Lodge in Southeast Alaska, chasing famous Alaskan rainbows and all five Pacific salmon species.

After two years in Alaska, Andrew is very excited to be in Pinedale chasing the trophy trout that swim in the area’s hallowed waters. He is looking forward to sharing his experience and the knowledge he has gained along the way. Andrew is a licensed U.S. Coast Guard Captain, and his passion for fly fishing has taken him all over the Mid West, the Rockies, the Gulf Coast, and Alaska. His favorite things are stalking fish on a saltwater flat any chance he gets and throwing big streamers for big trout! When he’s not on the water, you’ll find him hiking, snowboarding, and exploring the surrounding mountains.