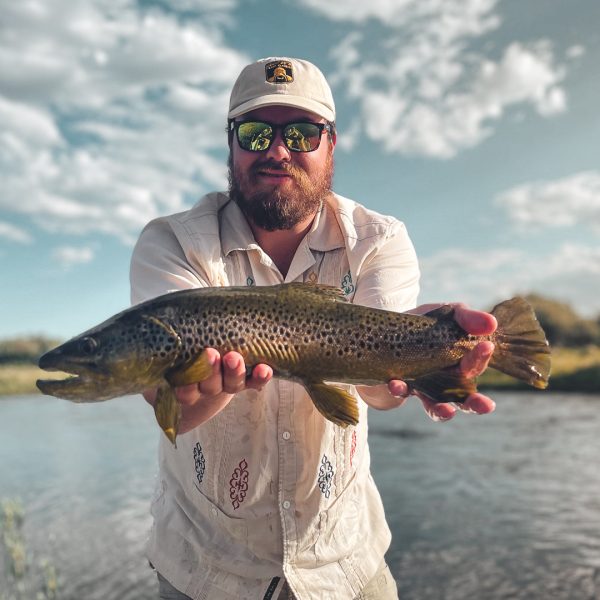 Frozen windshields, frosty grass and wild daily temperature swings are upon us. It must be fall in Pinedale. Duck season is fully underway, and so are our cast and blast trips, and both the cast and blast have proven very productive with the cool-down. The brown trout have moved into their staging areas as they prepare for spawn, and both rainbows and browns have become more aggressive. This time of year is usually a bit slower on the number of fish to the net, but just like the spring around ice-off, the big fish come out to play.

Green River: 271 CFS @ Warren Bridge
The Green River fishes well in the fall for several factors, but I usually attribute it to the lack of fishing pressure on public access. This area is a haven for big game and bird hunters alike, and for the most part, the hunters are off in the mountains on the hunt. Due to overnight temperatures, most surface-level dry fly fishing has wound down for the season, but browns and rainbows are ready to pounce on a streamer or are sucked to the bottom of deeper runs, feeding on smaller nymphs.
Flies to try: Jake’s Depth Charge Worm, F.K.A. Prince, Sparkle Minnow

New Fork: 306 CFS @ Big Piney
The New Fork has a similar autumn story about it; less fishing pressure from hunters means fish with their guards down. Following a high mountain snowstorm this past week, the New Fork saw a significant bump in flow for this time of year but not much color change. Medium to large streamers have been a hot ticket, especially in the lower reaches of the river. Lots of brown trout have moved up into anything with depth, waiting on their instinct to tell them it’s time to make a redd and get to business.
Flies to try: Galloup’s Mini Bangtail, Tungsten 20-incher, Baby Gonga

Seedskadee: 912 CFS @ Fontenelle Dam
Though it has begun to subside, thick moss is still something to think about when fishing below Fontenelle, but the fish are still active and aggressive. Once again, big streamers and heavily weighted nymphs are getting it done down south. With the lack of surface activity, the fish are hanging out near the bottom, so a drop shot rig or a tungsten cone on a streamer is perfect. Anglers shouldn’t have a problem getting some aggression strikes out of these fish.
Flies to try: Dungeon, Hot Bead Sow Bug, McClure’s Kill Whitey