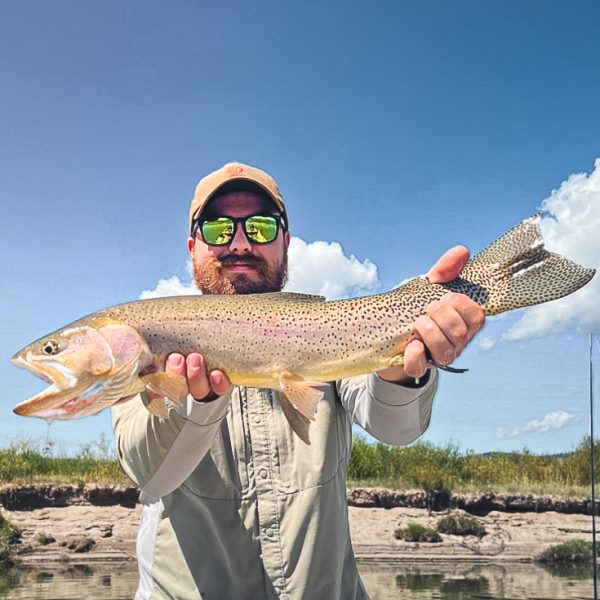 Though it looked for a bit that we would have another long fall, the fish have remained active throughout the season. It’s been an unusually warm September, but alongside sub-40-degree nights, the water temps have continued to stabilize. As October gains on us, we expect the fishing to continue to improve, but it to become increasingly sub-surface focused. With the help of cold weather and rain this week, we should see an overall shift in the fishery, and hopefully, some ducks begin to move down into the area.

Green River: 200 CFS @ Warren Bridge
Due to the lack of pressure this time of year, the Green has been fishing quite well. The Warren Bridge Recreational area is probably your best wading option. Low water makes for easy reading of water, and Warren Bridge is very dynamic with lots of troughs and runs throughout.
Flies to try: Circus Peanut, Hot Bead Pheasant Tail, WD-40

New Fork: 290 CFS @ Big Piney
Lower on the New Fork has been productive, where the river widens with more water concentrated, and the browns in those deeper areas seem to be getting aggressive in this pre-spawn time. Streamers have also been effective here, especially with cloud cover rolling in. Small terrestrials are still an option, along with a small dropper.
Flies to try: Lite-Brite Perdigon, Mini-Dungeon, Amy’s Ant

Seedskadee: 963 CFS @ Fontenelle Dam
The Green below Fontenelle is picking up quickly, with cooler temps and a slight drop in flows. Subsurface is still the name of the game. Deep diving nymph rigs and heavy streamers should get the job done. Worms and scuds under an indicator bouncing off the bottom are going to pull those larger fish sucked onto the bottom of the runs.
Flies to try: Jake’s Depth Charge Worm, Midweight Scud, Nancy-P