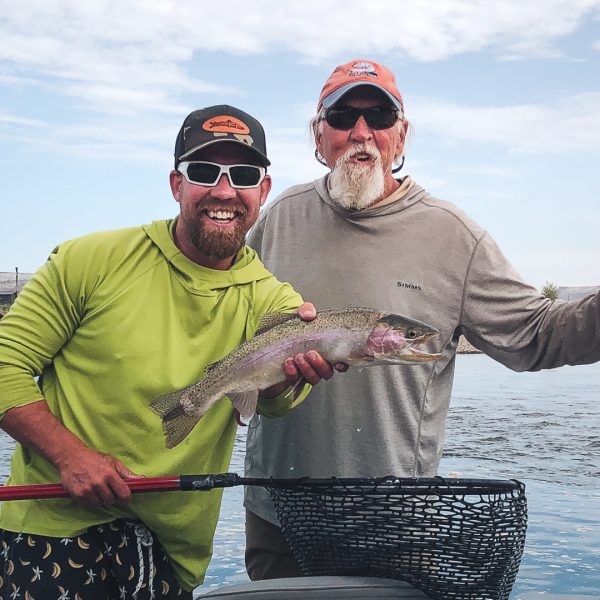 Fall is here, ladies and gentlemen. We have officially reached the point in the year where we are getting high 30s overnight and still seeing mid 80’s during the day, so make sure to layer properly. The water temperatures are stable and healthy, and we have seen a drastic increase in fish activity lately. At this point, it’s hard to spend your whole day counting on finding fish on the surface, but streamers and nymphs are becoming more and more effective by the day.

Green River: 253 CFS @ Warren Bridge
The Green has really begun to take a turn for lower water of late, but all that does is isolate fish activity to smaller areas. The water becomes easy to read, and with cooler temps, there is no need to worry about fish migrating out for cooler water. Small terrestrials are still king, such as small ants and beetles, and the trico activity has slowed down a bit for now. Mid-day sun may significantly affect trout behavior, so having some droppers in your box is a good idea.
Flies to try: Sparkle Flying Ant, Amy’s Ant, FKAP Prince

New Fork River: 301 CFS @ Big Piney
The New Fork has held water levels a fair bit better than the Green this fall. However, most of the action is happening below the surface, with the exception of a few large attractor patterns. A dropper rig under big foam or a small streamer on a cloudy day should get the job done.
Flies to try: Circus Peanut, Mini Kill-Whitey, Batman Nymph

Seedskadee: 1010 CFS @ Fontenelle Dam
Seedskadee has been very productive lately, especially under an indicator. We are nearing the brown trout pre-spawn, so they should be bulking up on calories soon to make it through the spawn. Larger streamers will begin working well very soon, as well as big, heavy indicators with euro-style jig nymphs.
Flies to try: Iron Lotus Jig, FKAP Prince, Dungeon