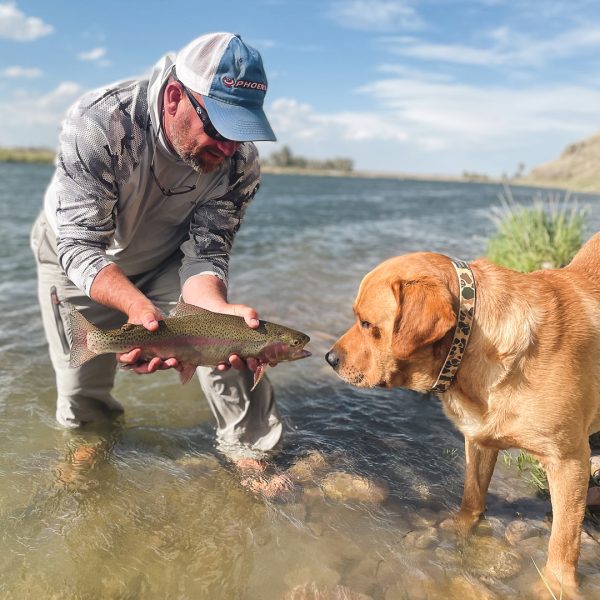 We are halfway through August, and it feels more like September already. The weather has been terrific, and so has the fishing. After the rains, the water has remained cold throughout the day. However, it has been quite sunny this past week, and during the day the fish have been a bit trickier to coerce to the surface. Dry-dropper rigs have been incredibly productive for picking up fish during the mid-day lull.

Green River: 461 CFS @ Warren Bridge
The Green has been particularly productive, especially toward the mid-reaches. High up, you are likely to find picky, highly pressured trout. Most of the fish you’ll find rising will be to Trico’s and Flying Ants still, and the action hasn’t begun to die off just yet. Again, during the middle of the day when fish might be more reticent to surface, a nymph dragging below your dry will likely be the ticket.
Flies to try: Glitter Ant, Small Chubby Chernobyl, The F.K.A. Prince

New Fork: 374 CFS @ Big Piney
The New Fork has been a bit quicker to warm up these days, so fishing early is crucial. You’ll likely find larger fish tucked under structure or banks sipping bugs early and late, while a full nymph rig during the middle of the day will produce some nice fish. Another tip would be to skate something with long legs across riffles and get some aggression eats out of larger browns.
Flies to try: Batman Nymph, Circus Peanut, Burchell Midge

Seedskadee: 1,280 CFS @ Fontenelle Dam
The moss is starting to build a little bit more but hardly noticeable, especially closer to the dam. The big fish have been coming from subsurface for the most part, but if you catch a trico or flying ant hatch down there this time of year it can be a real treat.
Flies to try: Green River Flying Ant, Jig Squirmy Worm, The F.K.A. Prince