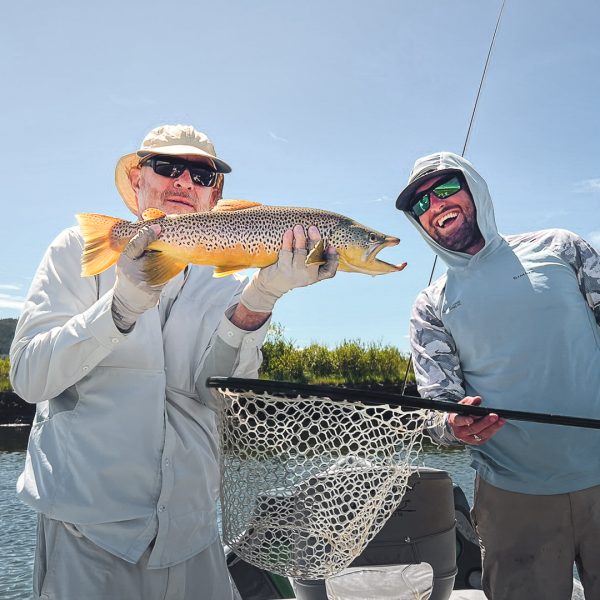 August is here, and the days are already getting a little bit shorter, but the fish haven’t slowed down. On warmer days, be aware of rising water temperatures. Most days this month already have had precipitation and cloud cover. A few days ago, we saw a large storm move in and out of the Pinedale area, which caused the Green and New Fork Rivers to swell quite a bit for this time of year. The cooler water was very much welcomed, and we look forward to more afternoon showers looking ahead to the weekend.

Green River: 537 CFS @ Warren Bridge
The Green saw the largest rise in water levels at over 1,000 CFS in August, which is quite rare and greatly beneficial to the fishery overall during the most consistently warm month of the year. With this cooled water, fish have remained active. We have seen early tricos in smaller numbers, some flying ants, and caddis. Hoppers are also out in great numbers.
Flies to try: Green River Flying Ant, Guide Winna Spinna Trico, F.K.A. Prince

New Fork: 410 CFS @ Big Piney
The New Fork definitely saw a smaller bump in flows, but the tributaries coming out of the Wind River Range fed cool water into the New Fork all week. The bug activity is very similar to that of the Green. It appears the caddis numbers are less on the New Fork, but Trico numbers are up and the fish are looking for the little bugs.
Flies to try: Amy’s Ant, Parachute Trico, Morrish’s Hopper

Seedskadee: 1,180 CFS @ Fontenelle Dam
The Green below Fontenelle has been fishing quite well lately—and compared to usual—the moss problem is relatively at bay. Most of the fish being caught are on nymph rigs due to high winds keeping bugs off the water and increased fishing pressure, but the further you get from the dam into the refuge, you can coerce fish to come to the surface for a large terrestrial.
Flies to try: Hot Head Sow Bug, Jake’s Depth Charge Worm, Circus Peanut