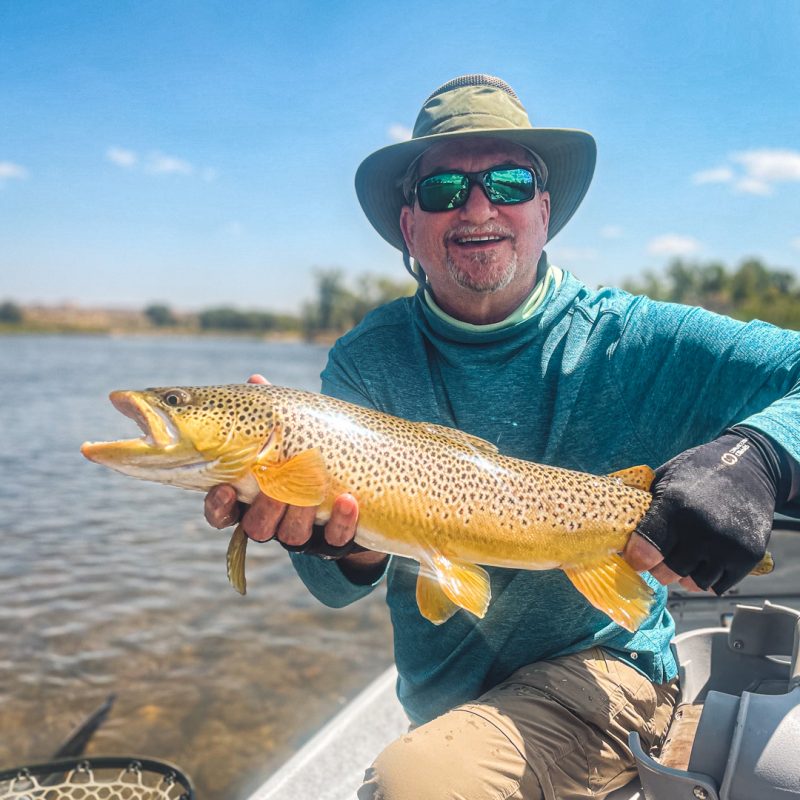 Take a glance over the pictures in past fishing reports, and you’ll probably notice a pattern. Most of them have a slab of yellow, blue, and brown in there. It’s no coincidence that people catch a lot of brown trout around here. After all, this is Brown Town, WY. Sure, we have a healthy number of species in the area, but on the Green and New Fork and many tributaries, Old Browntooth is king. That probably has something to do with the resilience of the brown trout in adverse water conditions. They’re predatory, aggressive, and can put up with warmer water than a lot of other trout. If you take a look at average water temps over the years, you’ll probably notice that our rivers do tend to be a bit on the warmer side during the dog days of summer. While many other trout hunker down when temps start climbing, the browns stay at it and keep eating. More food equals more growth and reproduction, and it’s easy to see that the browns around here are plentiful and healthy. I’m not saying you should keep fishing when the water gets up over 70, but over a long time here, the brown has established itself as the dominant species for just this reason. Don’t believe me? Browns haven’t been stocked below Fontenelle in over 30 years. Compare that to the thousands of rainbows, cutthroat, and others that get stocked every year, and decide for yourself when you tie into one of the monsters down there. No, they’re not native here, but neither is anything else. But that’s a story for another time. You might say the brown trout is the unofficial mascot of Pinedale. Spend a night or two at the Cowboy or Corral bars, and you’re bound to see some brown trout tattoos. Heck, if you’ve ever been by the grocery store, you can’t miss the giant brown on the roof. Especially in years like this, with many places in the west experiencing unprecedented issues with high water temps, we’re thankful to be where we are. Our unique mix of elevation, climate, and water all come together to make this place what it is. Sure, like anywhere else, we have tough days sometimes. But for every challenging day, there are plenty more where the blue-cheeked king of the river is just waiting for your fly to come along and take you for a ride.

Believe it or not, we’re keeping it rolling with good water temps and great weather. Mornings have been a bit chilly, so pack a jacket and maybe your waders. The dry fly bite is holding strong with fish coming up for everything from size 10 chubbies to 22 tricos. Water levels are relatively stable, albeit low, which means many fish are stacking in and around the deeper holes. Running nymph rigs through the deep stuff can be very productive, but don’t miss the shallow stuff near the big holes. Fish will often sit in the shallows near these holes to feed, knowing they have a good spot to run to if they get spooked. Again, keep an eye on the temps getting into the afternoon.

Update: We have a report of someone getting a really big brown to smash a duck. He didn’t land it, but he came close. As they say, close only counts in horseshoes and hand grenades, so the hats are still up for grabs. See last week’s report for details if you missed it.

Lakes: In the alpine lakes: leeches, scuds, and chironomids—caddis or callibaetis on the surface. Soda is in full damsel and chironomid mode. Not sure how to effectively fish these dudes? Drop by the shop and we’ll fill you in. Our lake boys are still sticking big fish on the frontcountry lakes by getting down deep.