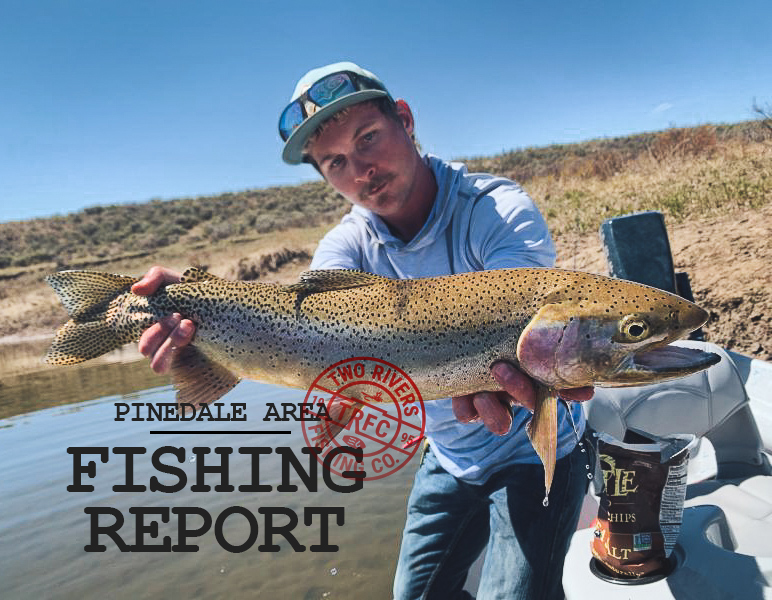 Oh look, he’s smiling for a change.  The fish looks pretty happy too.

High temperatures have kicked runoff into effect, and river levels have jumped up in the past few days. Don’t give up hope quite yet, though, as high water means everybody’s favorite flies to hate are in play. That’s right; the lowly worm is now #1 on the menu. Squirmies, San Juans, Depth Finders, whatever worm pattern is your favorite, as long as it’s pink or red. Dirty water means it’s tough to see snags in the water, so if you’re heading out, make sure you’ve got a box full. High water also means wade fishing is getting a bit tricky, so watch your footing out there. It might be hot outside, but the water’s still cold enough that you really don’t want to go for a swim.

Green River: 1910 CFS @ Warren Bridge. Worms, worms, and worms. And just maybe some Salmonflies. As usual, the Salmonfly hatch that we see on the Green is happening with high dirty water, which gets interesting. Floating is the way to go on most stretches from Warren Bridge down, and with high water, things happen fast. A Water Walker, Big Sky Salmon, or big Chubby Chernobyl right up against the bank can deliver explosive hits. Pair up a worm with either a big dry or big stonefly nymph and get ready to rodeo. Get a take on one of these supersized stoneflies, and you’ll be in for a fight at high speed.

New Fork River: 2010 CFS @ Big Piney. Give ya one guess….worms! Hit the shallower water on the inside of bends in particular. Big fish are starting to tee off on our squiggly friends and are much less spooky than usual. We don’t usually see the same numbers of Salmonflies on the New Fork, but there are a few kicking around, and they may just stick a hog.

Seedskadee: 792 CFS @ Fontenelle Dam. Yep, that’s low. Fishing from the dam down has been good, with fish congregated into particular areas. Find one and you’ll probably find more. Getting further down into Seedskadee, you’ll want to keep an eye on water temps. We’ve seen afternoon temperatures in the high 60’s and low 70’s in the last few days, which starts getting extremely stressful for trout. Putting the rod down at that point is the thing to do. We’ve spotted some other targets down there that are just fine with higher temps, though. If you see Chris’s favorite trout alternative basking in the sun, a big old carp is a hoot! Drag a leech pattern past one of these lovely overgrown goldfish and get ready to see your backing.

Lakes: Fontenelle, Boulder, and New Fork Lakes are hot right now on trolling gear and have been keeping our lake guides plenty busy. Now’s the time to book a lake trip! Kokanee have been high on the hit list in Fontenelle and New Fork Lakes, and Boulder has been delivering some very nice Mackinaws. The high country is still fairly locked up with snow above about 9500′, so most Alpine lakes are still more or less inaccessible.