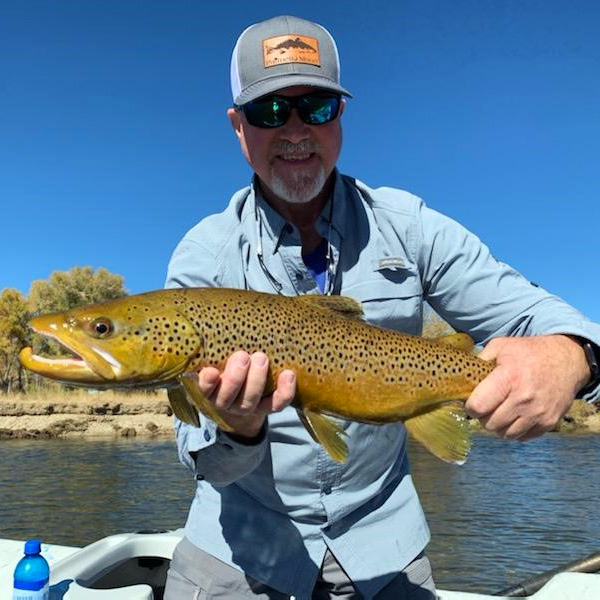 Late season?  These guys are just getting going.

Here we go, October in Brown Town.  The leaves are turning colors and the most consistent hatch is probably the blaze orange in the hills.  That means it’s time to get down and dirty with the Browns getting seriously aggressive.  Looking for a hook-jawed savage beast?  Now’s the time.  While we’re still seeing sporadic hatches of midges and bwo’s, the real action is under the surface.

It’s bird season too!  Waterfowl season is in full swing and the birds seem eager to please.  Relatively warm temps mean warm toes in the blind and it’s not too late to grab a day or two on a cast a blast trip.  Not too many people think waterfowl when they think hunting in Wyoming, and that means unpressured birds and fun shooting.  Give us a call in the shop to set up a trip!

New Fork River:  265 CFS @ Big Piney.  It’s streamer time!  Run ’em through the big holes and shallow riffles, the big boys are on the move.  Otherwise, nymphs in the 14-18 range are picking up plenty of fish.  Try out some Lil Foamies and Radiation Baetis.

Green River:  146 CFS @ Warren Bridge.  We’re still getting a few on Chubby-style dries, but mostly streamers and nymphs.  Your attractor patterns in 14-18 are delivering well, check out the Two Bit Hooker and Holo Batman.

Seedskadee:  1080 CFS @ Fontenelle Dam.  As of yesterday, the section from the dam down to the wire above Weeping Rock Campground is CLOSED.  Below there however, the action has been on hot head pheasant tails, sow bugs, eggs, scuds, and of course streamers.  Check out the Swim Coach, Drunk and Disorderly, and Home Invader for some big eats.