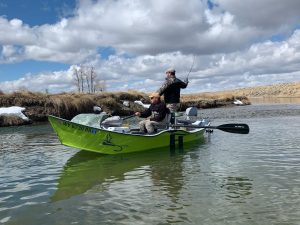 Fish on!  Although the weather has been a bit chilly and blustery this week, people are getting out and fish are hungry!  We’ve seen a bunch of activity with big browns sitting on the edges of pools and rainbows starting to hit the riffles.  With temps climbing through the weekend, we should see a significant bump in fish activity as more bugs start getting mobile.  Water levels are still a little on the low side to float in places, so watch where you’re dragging, rainbows will be starting to go into their spawning behavior and digging redds in the Green and New Fork.  Try not to trench up the clean spots in the gravel!  The flow gauges on the Green at Daniel and New Fork at Piney are out of service for the time being and we have no idea when they’ll be up and running again, so we’ll try to keep you posted on here as to water levels as best we can.  If you’re thinking about floating a specific stretch of river, give us a call for the latest! 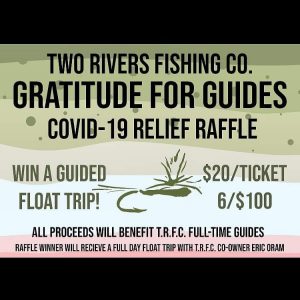 Win a float trip for $20?  Heck yeah you can, and you can help out our guides who are going to be hurting this season.  We’ll be drawing winners May 1, so get your tickets while you can!  Winners?  Yep, for every 200 tickets sold, we’ll add a trip.  So that’s more chances to win.  Give us a call in the shop or click HERE to get yours! 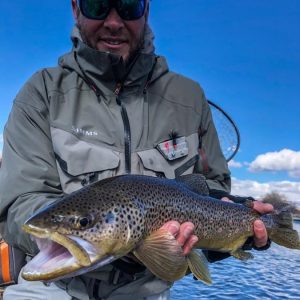 New Fork River:  ???CFS @ Big Piney.  Water levels are on the lower end of the scale but there is enough to float from Boulder down.  Fish are stacking up on ledges and dropoffs next to riffles with mostly browns being caught this past week.  Rainbows are starting to get more active as they ramp up toward the spawn and are moving into the faster water.  While there are small sporadic midge hatches around, it’s been mostly a nymph game with worm patterns and attractor nymphs in the 8-14 range being the ticket.  Of course with the nymphs be ready for a pile of whitefish, but where the whities are, you’ll likely find trout close by.

Green River: 435 CFS @ La Barge.   The Green above Fontenelle bumped up a bit early this past week and has been slow to come back down and clear.  Visibility is slightly reduced but with some sunshine the fish have been active.  The river is iced off from Warren Bridge down, and some folks have been floating as far down as Houston’s.  Fish activity is fairly concentrated in the deeper runs with most trout seeming to still prefer the slightly slower water.  Bug selection is pretty similar to the New Fork for the moment; worm patterns and attractor nymphs have been the ticket fished deep and slow.

Seedskadee: 1380 CFS @ Fontenelle Dam.  Sow Bugs, Eggs, Scuds, and Meat.  Hot Head type nymphs have been working well as the rainbows are ramping up the spawn and everyone else wants to munch eggs.  Big meaty streamers have been getting attention from some of the bigger browns that are a little less shy during the day because of the rainbow activity, and there are some super-horomone-raging buck rainbows that are eager to crush a big articulated streamer.  Again, these guys are in spawn mode and if they’re sitting on a redd, they’re fun to look at but really shouldn’t be targeted.  Go for the dark water and the boomers that lurk there.

Smaller Creeks:  Little by little, opening up.  If you’re heading into the foothills, a pair of snowshoes and super warm socks under your waders may be the ticket to being the first to put a fly in front of the residents all year.  Valley creeks are clearing up nicely after last week’s bump in the flows and folks have been finding some really nice trout in small water.